Stories, songs and films of railway travel from Carmarthen to Aberystwyth, with Ceri Rhys Matthews and Peter Stevenson, with films by Jacob Whittaker and Joanna Bond from ‘Singing the Line’

The title ‘Railroad Humours’ and the poster comes from the 1926 book by Carmarthen stationmaster Thomas Phillips (below).

A collection of images from the line taken during site visits.

filled and the audience were welcomed with a song from Joanna Bond with percussion from Ceri Rhys Matthews (this version below is accompanied by the train sounds).

‘So to start I want to paint a picture … It’s July 2012, in a sleeper carriage two newlyweds are returning from 10 days honeymoon in Prague gazing out of the train window into the blur of the world and lost in train dreaming time of each others presence. Passing Germany the female an artist who up until now mainly worked in ceramics the male an aspiring politician with a poet’s heart. The artist gazes out of the window and is fascinated by futuristic train she quickly grabs her sketchbook and starts to draw.   As she draws and writes recording the atoms as they fall into her mind, railway time, train dreaming, songlines, roots, social value, Wales and a question appears…

How can you go all the way to Prague on the train and not go from Bangor to Cardiff without going through Shrewsbury?’

With a cup of tea visitors were invited to look at the exhibition layed out around the room – a selection of documents, maps, drawings, photographs and objects from the last three years research work including ceramic tiles made on a railway platform at Aberdyfi, a carriage window and a milk churn used in a performance by Joanna inspired by the Pont Llanio creamery.

Storyteller Peter Stevenson told a few colourful stories from the line’s past and Ceri Rhys Matthews performed some wonderful songs and music from the area including ‘Trip i Aberystwyth’ a song specifically written about a journey along the line. 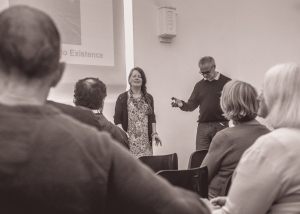 ‘Our plan over the next 6 weeks is to explore the line, its cultural and physical landscape, to discover it’s stories and sing it’s songs, to engage and enthuse people along the line by placing art at the heart of a community and political campaign.   The work we develop on sites of the old line and in the studio will be blogged about as we go and will become the core of a multidisciplinary exhibition and performance event starting at 7pm in Ceredigion Museum,  Aberystwyth on October 3rd, we hope you can join us.’

Hi all, great news – We got an Arts Council Award!

“Artist and member of the Traws Link Cymru committee Joanna Bond has been awarded a Grant from the Arts Council of Wales for her project Singing the Line into Existence – a creative response to reinstating the railway line between Carmarthen and Aberystwyth. It has been 3 years in development and involves a number of local artists including Ceri Rhys Matthews, Jacob Whittaker and Peter Stevenson, telling stories, singing songs and creating video and performances along the line.

The project launches at 3pm on August 22nd with a free event in Oriel Myrddin Gallery where there will be an opportunity to learn more about Joanna’s artistic vision and her research to date as well as the ongoing campaign to reopen the line through presentations from the artists and Traws Link Cymru as well as performance and exhibition.

Following the launch event the artists will begin to explore and experiment along the route of the line, learning about the histories and landscapes and creating new video, sound and performance works for the destination event at 7pm in Ceredigion Museum, Aberystwyth on October 3rd (£3 entry). 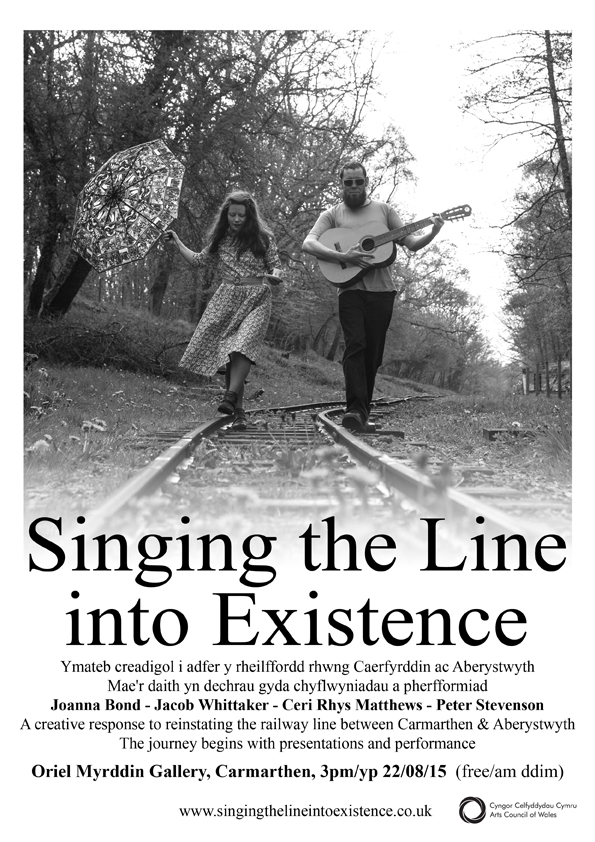