Ceri’s performance for Singing the line into Existence

Working with Ceri Rhys Matthews was a wonderful experience. We met through Peter Stevenson, a mutual friend and fellow artist on the Singing The Line project. I had been to a Fernhill gig where my heart melted at the sound they created. I would also regularly loved seeing him play at tupaths in the Small World Theatre and in New Quay Memorial hall. I am a huge fan now of traditional Welsh music and dance. It was actually at a tupath at New Quay Memorial that I approached Ceri about the project, he was enthusiastic and interested in being part of it. The idea was to learn a song in Welsh relating to the train line. There was a choice between two songs; one about a journey to Aberystwyth called Trip i Aberystwyth and a song and story specifically about Pencader and the tunnel. In the application I had decided that the Pencader tunnel story and song was what I wanted, however after hearing Ceri’s version of Trip i Aberystwyth and the knowledge of it being a very old tune worked better for the project. He says “some of old tunes you hear have been kidnapped and turned into children’s songs”
A musician when playing a piece has the ability to play it differently each time, as each moment is different depending on the people you play to, the strings, the quality of voice or the state of emotions the musician is experiencing can take a song and change it for that moment, It’s like taking a photograph, once the moment has been captured it is then transformed into something else”

Ceri taught the song to me over that day. As Ceri has taught many non-Welsh speakers how to sing in Welsh he was able to have the patience to go through each word and I wrote down how it sounded phonetically, it made me giggle as it looked like a made-up language. Ceri then went through the melody. I recently bought myself a zoom recorder so that I could record my songs and practices to a very high quality. We spent the whole day going over the song. Ceri then recorded it. I spent then 3 weeks learning the song. It was probably one of the most challenging and nerve racking parts of the project. The self-achievement it gave me after the actual performance was enormously rewarding and self-assuring.

The performance opened with Ceri sat with his guitar and myself facing him, with the added surrealist quality of looking and singing through a train window that was resting on my lap.
The duet went really well, with comments such as “you sounded like you spoke Welsh” and “your performance sounded as if it was recorded”. However with a few more practices and tweaks it could have been even better.

Ceri also accompanied me with my performance dance piece with the milk churn. I had choreographed a sequence using the milk churn and when I had placed it on my head Ceri played his flute, repeating the Dion fechan and on different instruments including flute, guitar and the drone.
Ceri’s music was the also the score for the performance dance piece Ruth Hogg and myself performed. It fitted beautifully with the imagery we wanted to create with our bodies and the accompanying film visuals.
Ceri played the flute to accompany Peter while he told his stories. Peter and Ceri were familiar with this way of working. Their performance worked really well considering the tight budget restraints, and testament to their talent and experience in the way they complemented each other by listening and responding intuitively to each other.

The quality and repertoire of Ceri’s playing and singing is accomplished, beautiful and full of the richness of Welsh traditional music. I feel a deep sense that working with Ceri learning the Welsh song, dancing and performing to his music felt like a reawakening for myself and for the audience in the 21st century.

Working with Ceri Rhys Matthews was a wonderful experience that gave a richness to my life and to the performance. Music suggested the title of this project and Ceri was able to weave his music magically throughout. 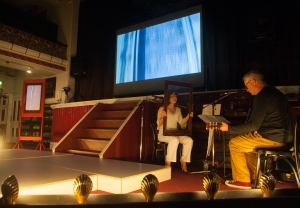