As part of the arts council funding I solicited the help of Movement artist Simon Whitehead , Simon works from both his base in rural west Wales and internationally.

On the 16 September I arrived for a one-to-one workshop at Simon Whiteheads Studio near Cardigan with a car full of objects that I have found during the research of Singing the Line into Existence, this included a steam train carriage window, a milk churn, a railway lantern and a original daggerboard from the Aberystwyth station. We placed the objects in a line against the studio wall and admired how by simply placing these objects this way we did created a story and installation.

Over a cup of tea  I talked to Simon about the project, my thoughts and ideas and what the objects symbolised. We discussed trains, transport, the objects and how ” I  had brought together a interesting group of experienced artists to explore how a creative, socially engaged process of making performance might raise awareness and have implications on the reinstatement of public services” ( Simon Whitehead 2015)

and progress in “developing physical performance material in relation to the sculptural form, movement and historical resonance of these object”  (Simon Whitehead 2015)

We both did our own individual 5 minute warm up, the warm up I used was a combination of a releasing technique, yoga and capoeira.

The first exercise Simon facilitated was a movement with eyes closed for 5 minutes and then writing or drawing what we experienced, moving from stillness, paying attention to internal impulses to move, to return to stillness. After I had moved Simon wrote his thoughts and feelings about the imagery I created. Then we swapped and Simon moved and I wrote. I felt total at ease with my surroundings and moving in front of Simon, I was pleased to hear that Simon  enjoyed having someone to perform in front of.

While improvising  I was drawn to the texture of the floor, the sound my knuckles made while running them along the floor. It reminded me of the sound a train makes when traveling along the track. I get and got a deep sense of inner healing when I move my body, as I continued to move my body the forms I created were bridges and tunnels reminding me of of the obstacles and challenges I have had to face during my life and the present challenge I am facing.

The second exercise was a visualisation technique, I was asked to visualize the of interior of the body: heart, movement of blood, movement of cells  intra cellular space…the fluid space between the cells. I found this fascinating  as I have been researching over the last year and a half how our gut brain can play an important part in our general well being and have been exploring how to translate this into movement.

The first object  I wanted to work with was the milk churn, I had been exploring how it moved and  playing with the sound it created. I wanted to convey and develop how we think about milk, and the milk industry back in the day when it relied on the railway line to transport the milk to all parts of Wales, London and Liverpool. During my research I discovered a derelict milk factory that stood next to a station called Pont Lanio .

During the workshop I developed a further relationship with the object, working on the movement it will create in my body by picking it up, dropping it, rolling, standing on it, spinning, moving the object without my hands, giving it momentum and letting it go…

I developed observing the object from different points of view (with my head inside the churn) composing the body and object in the space, using stillness, movement and the placing of the churn in relation to the body. I developed different ways of carrying and arranging the churn.

During the workshop we developed a sequence of rolling the churn in a linear way, pushing with feet and hands, walking alongside, overtaking, repeatedly creating the sound of the churn rolling, travelling with it and alongside it, speaking  into the churn and slowly standing upright, putting the churn on head in a standing position and doing a Breton folk dance to Ceri’s flute.

The second object that was explored was the train window.  I wanted to  convey – “framing the importance of the issue” being a passenger to sometimes the best show on earth, the landscape outside and the narrative within the carriage.

I am  interested in how the body fits into the frame of the window, moving behind the window. during the workshop I explored with Simon how the body travels across the space, keeping the body within the frame, looking out, pausing, squatting, lying with window on the body, holding the window in front of body and looking through whilst travelling, twisting the body, keeping window still.

The workshop was a very valuable and fruitful experience both theoretical and practical, I feel I have developed my practice and experience during this whole project and I am  continuing to develop with other performances planned for further on down the line. 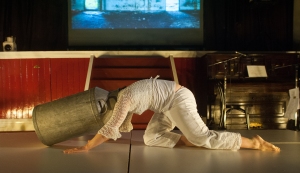